Immunoglobulins were first termed as “neutralizing substances” and were discovered by two immunologists Emil von Behring and Kitasato Shibasaburo in 1890. Immunoglobulins are the special types of glycoproteins that play an important role in maintaining the body’s immune system. Immunoglobulins are also called antibodies which are highly specific and secreted in a massive amount by the plasma cells in response to pathogenic antigens such as:

What are the Functions of Immunoglobulins?

Pathogenic Antigens Immunoglobulins Protect Us Against

Speak to a Specialist About IV Immunoglobin Therapy

For instance, antibodies released against the COVID19 virus will only bind to the COVI19 virus and not to any other virus or bacteria.   This diversity and specificity of immunoglobulins make the body’s immune system stronger and active against multiple pathogenic invasions.

The primary function of immunoglobulins is to elicit humoral immunity by binding to the foreign antigen.

This type of immune response is highly specific and complex. There are 5 different classes of immunoglobulins (IgG, IgM, IgA, IgD, and IgE) based on their functions, chemical structure, biological features, distribution, and target specificity.

Get Started with IVIG

Any genetic abnormality during the antibody processing or variation in the normal immunoglobulins level in the body increases the risks of developing various immunological diseases such as primary immune deficiency diseases or autoimmune diseases (a condition in which immune cells attack the healthy cells/tissue of the body).

For the past decade, medical researchers have been using gammaglobulins as immunotherapy for the treatment of multiple viral infections, bacterial infections, and autoimmune disorders associated with humoral immune deficiency.

Immunoglobulins are Y-shaped globular proteins and about 10nm in size and 150kDa molecular weight.

The polypeptide chains are held together via a disulfide bridge and form a Y-shaped structure.

This Y-shape structure is divided into two regions

As the name implies, the constant region does not change from one antibody to another but the variable region does.

Furthermore, the variable region of the antibody binds to specific antigens and is called a fragment of antigen-binding (Fab) site.

The region of the antigen that binds to the antigen-binding site is called an epitope.

Whereas, the constant region is typically the tail of the antibody called fragment of crystallization (Fc), which binds to the surface of immune cells or interact with receptor proteins of the complement system.

All antibodies exhibit dual functionality: binding to viruses or bacteria and mediate biological immune responses such as complement system activation, opsonization, and neutralization of microbial toxins and viruses.

Immunoglobulins protect the body’s immune system by regulating the multiple cell destruction pathways depending on the type of signals they received or pathogens they have interacted with.

Immunoglobulins are generally present either on the surface of B-cells or circulating freely in the body fluids. The binding of the antibody to its specific antigen results in the formation of antibody-antigen complex which elicits an immune response.

The immunoglobulins kill off the foreign invaders through three different types of mechanisms called neutralization, opsonization, and complement activation.

Figure 2: Binding of antibodies to the epitopes of foreign pathogens forming an antigen-antibody complex to elicit an immune response.

The neutralization mechanism focuses on the inactivation of pathogens. When the antibody binds to the functional part of the virus or bacteria, it inactivates the virus’s ability to bind onto the surface of healthy cells. Thus, neutralizing the biological effect of the toxins released by bacteria and viruses.

In this molecular mechanism, antibodies recognize and label the infected or cancerous cells. The labeled infected cells are then digested and removed by phagocytic cells such as macrophages or cytotoxic T-cells. In short, the opsonization mechanism enhances phagocytosis.

Activation of the Complement System

The binding of immunoglobulins to pathogens leads to the activation of complement proteins. Upon activation, these proteins build a membrane attack complex (MAC). The MAC proteins then cause cell lysis by punching holes in the cell membrane of the bacteria. The complement pathways can only be activated by IgG and IgM antibodies.

Classes Of Immunoglobulin And Their Function

The human body only makes 5 types of Immunoglobulins i.e.

These protect the body from multiple types of antigens. All antibodies are different from each other based on their amino acids sequence in constant region, structures (monomer, pentamer, and dimer), short-life in the blood, site, and immunological properties.

It also confers some extent of immunity to infants, when ingested through breast milk. IgG antibodies also remember the pathogens that are previously entered in the body and have caused the infection.

The function of IgG is to enhance the phagocytosis of pathogens, neutralizes the bacterial or viral toxins, and triggers the activation of the complement system. IgG has four isotypes; IgG1, IgG2, IgG3, and IgG4.

Immunoglobulin M (IgM) is the first antibody that interacts with new bacteria when it enters the body. IgM initiates a primary immune response when a new infection arises in the body.

IgM is also called a natural antibody because it serves as the first line of defense of the immune system and provides short-term protection.

IgM has a gigantic pentamer structure above all other antibodies and consists of 10 antigen-binding sites, which makes them more effective than IgG to kill bacteria or viruses.

The life span of the IgM antibody in our body is about 5 days and accounts for 5-10% of the average serum concentration.

IgM also causes agglutination (formation of clumps) of bacteria when binding to its surface epitope. IgM antibody is known as potent agglutinin and is also found on the surface of naïve B-cells and red blood cells in its monomeric form.

Immunoglobulin A (IgA) is the most common antibody after IgG. IgA is present in the blood, lymph, and other body secretions such as saliva, tears, milk, genital lining, respiratory tract, and intestine lining.

IgA antibody protects the body from bacterial growth and colonization. However, it is less stable than IgG and can be found in a lower quantity in the blood of about 10-15%.

IgA is often called a secretory antibody because of having an attached secretory component that protects them from enzymatic digestion. Every day, a human secretes about 5 to 15g of secretory IgA into mucous secretions to prevent pathogenesis.

Besides, It has been researched by immunologists that up to 50% of proteins in breast milk colostrum are due to the presence of IgA. IgA antibody has 2 sub-classes; IgA1 and IgA2 having their own biological properties.

Immunoglobulin D (IgD) makes up only ˂0.5% of serum antibodies. IgD is found in lesser amounts in lymphatic fluids and blood. The function of IgD is still unknown but it’s present on the surface of immature B-cells as receptors and also a part of the innate immune system. It’s believed that IgD regulates the B-cells activation and differentiation into plasma cells.

Immunoglobulin E (IgE) makes up only <0.01% of serum antibodies. Even though it’s present in the lowest amount in the blood and has a shorter lifespan, it’s a predominantly potent antibody.

IgE is the most effective antibody against parasite infections including helminths.

Furthermore, sometimes a high level of IgE in the blood can cause hypersensitivity toward non-harmful substances such as pollen or dust particles. Recently, immunologists have been formulating new anti-IgE antibodies for the treatments of allergy and asthma.

Disease-related To Deficiency Of Immunoglobulins

The medical professionals of immunology have stated that a person could have immunoglobulin deficiency or have non-functional immunoglobulins due to a defective immune system.

This is a rare genetic condition known as primary immunodeficiency disease (PIDD).

There are more than 300 types of primary immunodeficiency diseases that have already been reported by medical researchers.

However, some immunodeficiency disorders are caused by some external environmental factors such as:

A person suffering from primary immunodeficiency diseases is likely to have a weaker immune system and is more prone to common infections and other various severe immunological problems.

Get Started with IVIG

Immunoglobulins Blood Test And Their Indications

If an individual is suffering from common infections and recurrent diseases at repeated intervals, there is a chance he or she has a weaker immune system and may have lost immunity to fight off diseases.

An immunoglobulin blood test is conducted by taking a small amount blood sample from the patient’s body to estimate the level of specific antibodies such as IgA, IgG, and IgM.

Immunoglobulin tests help diagnose various health problems that are affecting the level of immunoglobulins in the body.

The antibody results are measured by comparing them with the normal immunoglobulins range.

If the levels of IgA, IgG, and IgM are too high or low, then there is a high chance of severe health problems

May indicate the presence of:

May indicate the presence of:

Moreover, the deficiency of IgG is still unknown but it could happen due to genetic defects.

Low IgA level increases the chances of getting:

Sometimes people are born with IgA deficiency or a defective gene that produces too little IgA in the body.

IgM serves as the first line of defense and normally IgM levels increase in the blood which indicates that the body has been exposed to new infections.

People suffering from inherited immune diseases, leukemia, or multiple myeloma are more likely to have a low level of IgM in their blood.

Some Common Symptoms Of Iga, IgM, Igg, Deficiency Are;

Moreover, early symptoms and diseases can vary from person to person.

For further confirmation of diseases, doctors recommend more tests depending on the symptoms of a patient.

Clinical Use Of Immunoglobulins

Immunoglobulins have always been recognized as the most effective immunotherapy to treat infectious and primary immunodeficiency (PI) disorders.

Immunoglobulin replacement therapy was first introduced in 1952 to treat X-linked agammaglobulinemia (a genetically inherited condition) and is now considered as a standard method for the treatment of PIDD over the past 3 decades.

There are two ways for the administration of Ig replacement therapy. It can either be administered intravenously (IVIG) or subcutaneously (SCIG).

The patient’s preference, previous medical history, IV access, cost, availability, and tolerability are all essential factors that are considered during the selection of administration route.

SCIG infusion is given into the subcutaneous layer of skin and infused in small doses using a syringe at different sites of the body such as:

The volume of SCIG infusion is between 10-25ml with repeated intervals of once or twice a week.

SCIG infusions take between 1-2 hours and can be self-administrated at home.

It is important to choose the correct size and number of needles for this therapy to ensure a successful infusion.

IVIG is directly administered through a vein in larger volumes and takes approximately 2-6 hours to complete.

On average, repeated doses are given every 3-4 weeks.

The dose and frequency of IVIG depend on the patient’s current body weight and disease state. The estimated starting dosage is 2gm/kg/month divided over 4-5 days.

Immunoglobulin therapy is used to treat various diseases such as, but not limited to;

Common and Adverse Side effects

To prevent or alleviate these side effects; 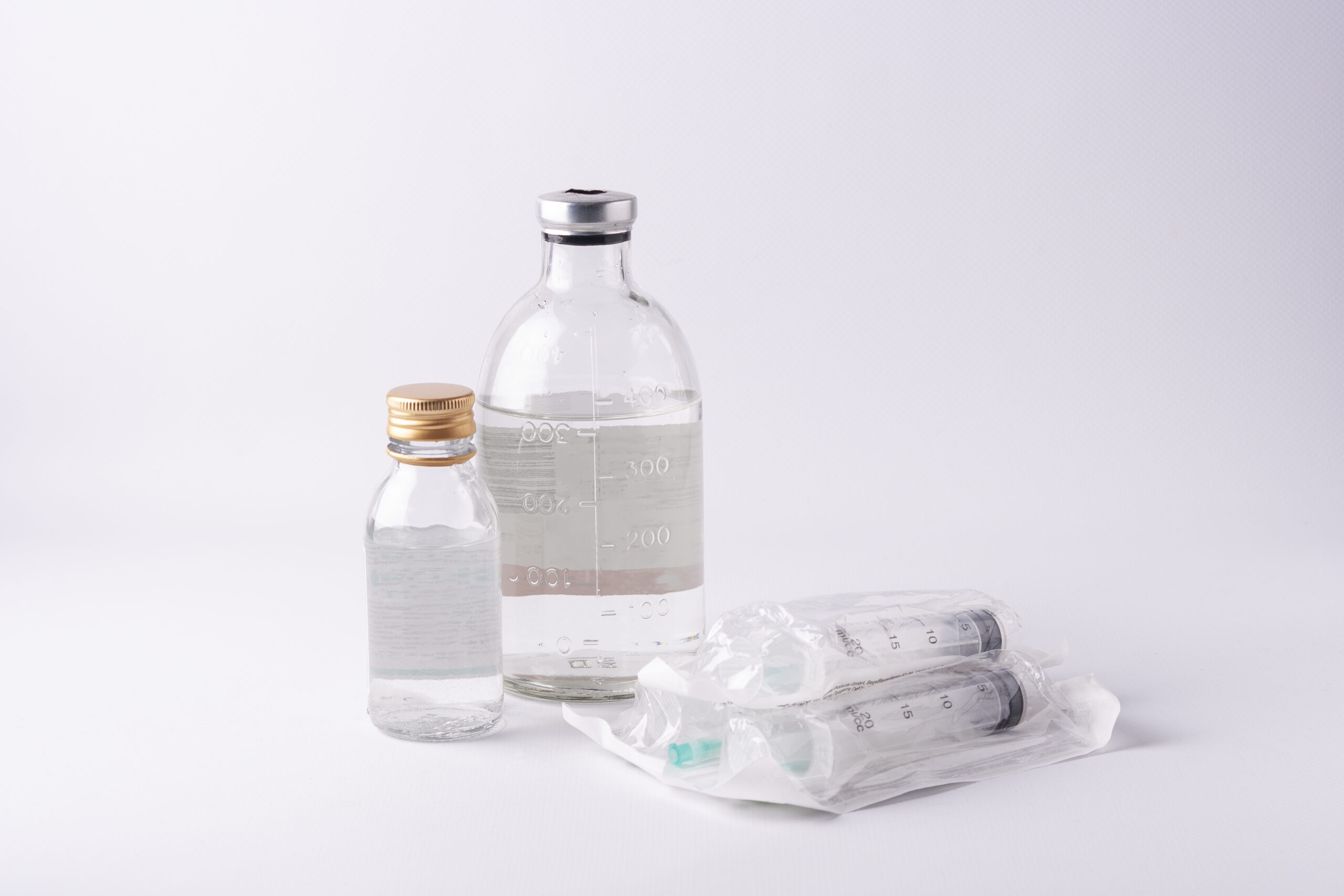 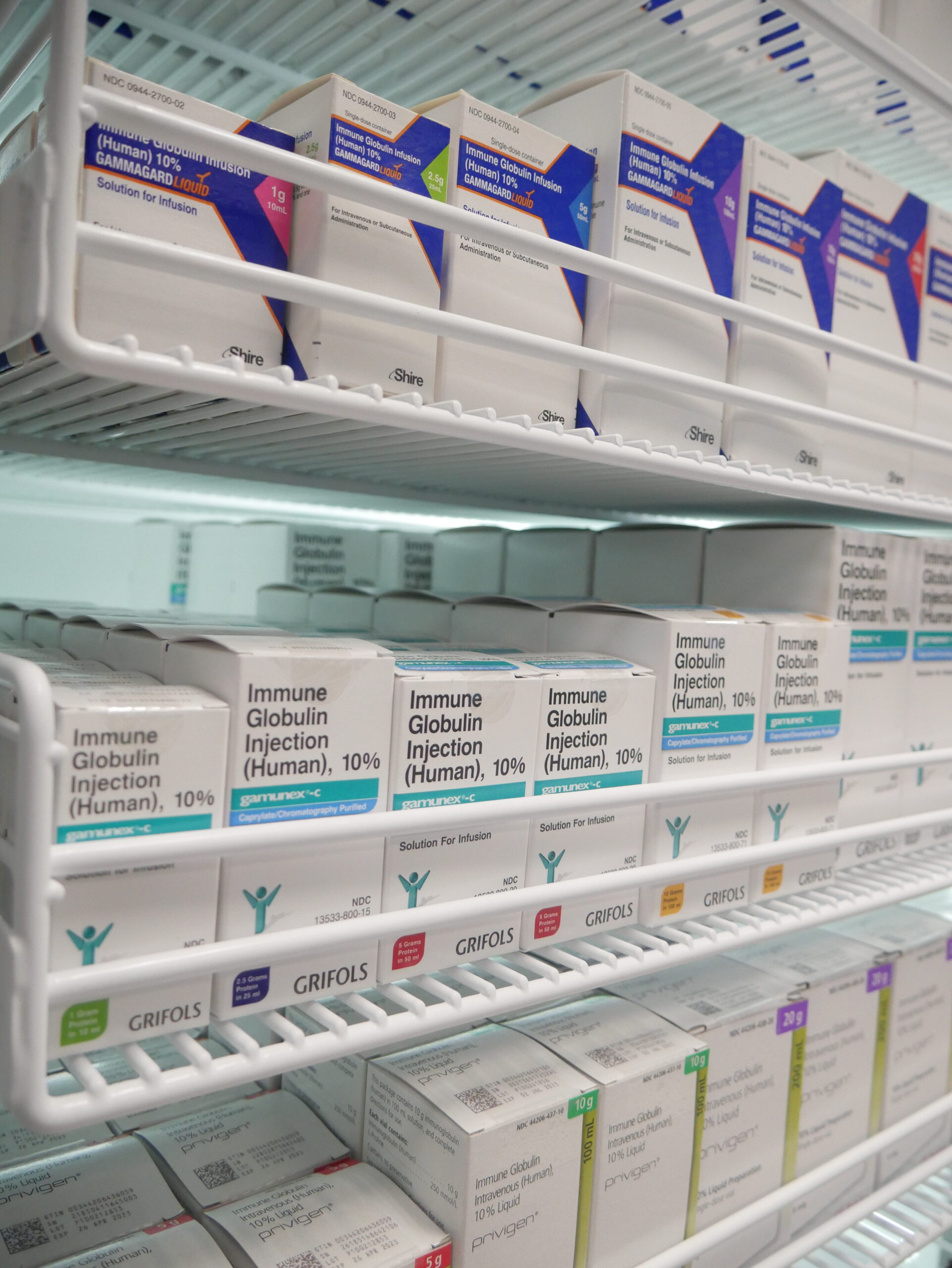 Gammaplex: What You Need To Know 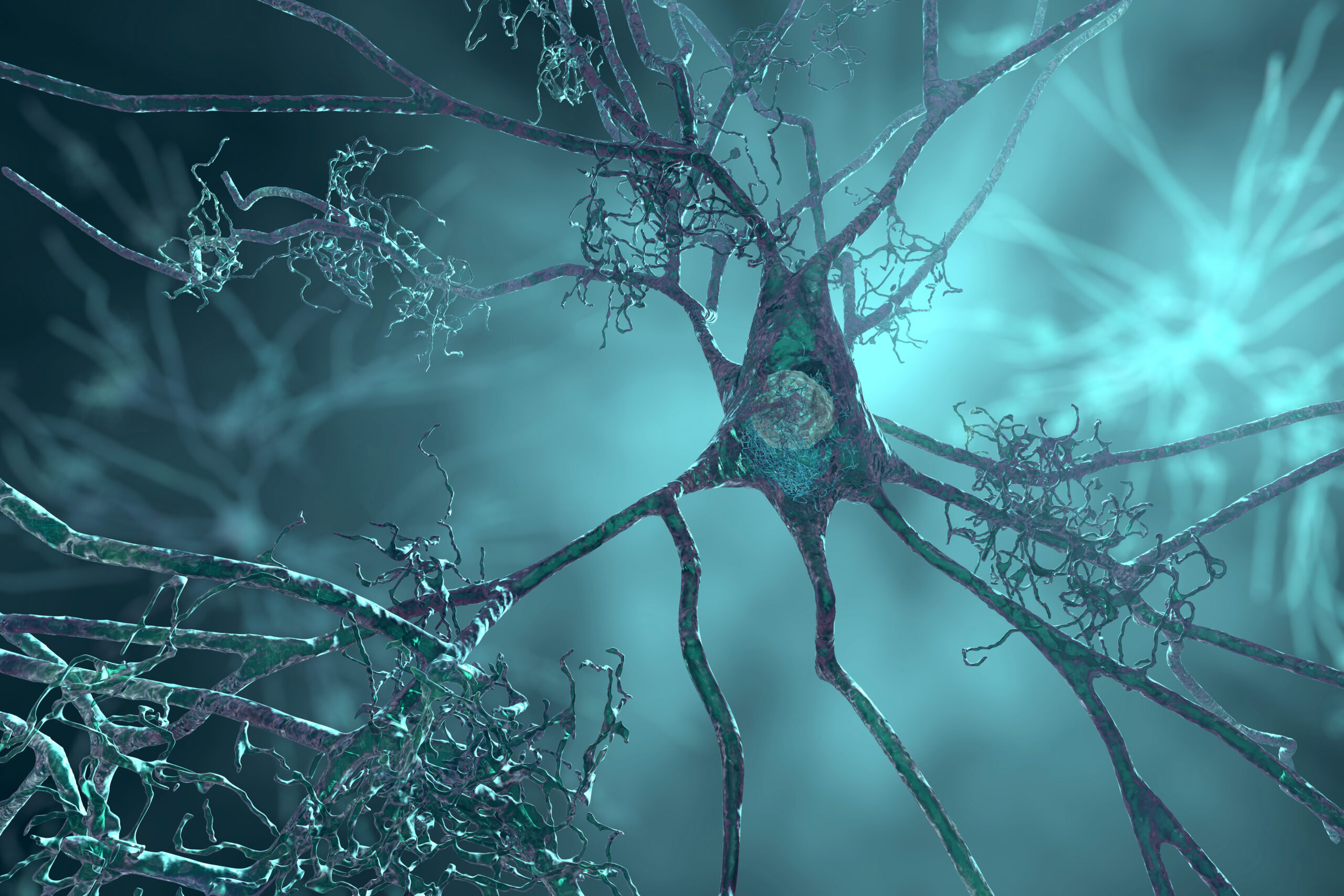